Her linen apron smelling of star anise and cinnamon sticks the merchant at the refillery grocery store apologies to a customer, yet again.

She ruefully relays that she must pass on the merchant 2% credit card fee because, since she took over the business last year, the small seaside town has been hit by the loss of tourists from the border shutdown and every business in town is in a stranglehold by the merchant acquirer and point-of-sale processors, which charge up to 4% on contactless payments and credit cards. She doesn’t offer G-Pay or Apple Pay because that would cost more again.

It’s been a tough year to start her fledgling business since she relocated to the small rural town with her husband and two kids after 15 years in Dubai. They both decided taking on a small business was the best thing to do to get over the culture shock and meet new people.

She’s not good with digital marketing or social media which, she’s since been told, is a prerequisite for today’s small business owner as it’s “free marketing”. But she would have to hire someone to do that and wage inflation has gone through the roof since the government slashed interest rates.

“If only there was a way to attract more customers and advertise the business without me having to fork out thousands on a hiring or upskilling,” she thinks to herself.

A man in a white polo shirt with a black logo beaming a wide smile steps into the store. He hasn’t brought a reusable shopping bag, the staple of all her customers, but is carrying a flip chart folder under his arm. She recognises the logo on his polo shirt from the decals on a car that had been parked around town for the past few days.

“Are you ready for an incredible opportunity to support local business, you and your family? Have you ever heard of Qoin?”… the pitch begins.

Qoin is marketed as a form of local currency supporting SMEs with zero merchant transaction fees and “zero cost to join”.

The marketing on its website www.qoin.world appeals to small business owners, with emotive claims that it will “generate new customers without boundaries” and “generate new wealth and profitability”. Sales reps have been visiting small retailers in tourist towns (hit by a double-whammy of closed borders and high inflation) across New Zealand and Australia.

Qoin is a sister company of Bartercard, a long-running successful Australian local trade system that still operates in Oz, NZ, UK and Thailand. Bartercard is a marketplace where people in their locality could trade their time and skills for Barter Dollars, which had a 1:1 peg with fiat AUD, NZD etc. In crypto parlance, Barter Dollars are a forerunner to stablecoins.

According to its whitepaper, Qoin is built on a private/permissioned network on Ethereum’s Quorum chain and the cryptocurrency is “backed by goods and services, [and] allows innovative ways for merchants to attract shoppers.”

A brief explanation from its whitepaper on how Qoin is “backed” by goods and services:

“Most businesses have some spare capacity to accept new customers. We tokenise this spare capacity in the form of the Qoin digital currency. Participating merchants in the ecosystem accept Qoin from customers as payment for their goods and services.”

In its whitepaper, it estimates their total addressable market (TAM) of is “US$1.0 Trillion per annum… Based on 10 million merchants.”

Governing this network of US$1 trillion in transactions is the Qoin Association, a membership organisation headquartered in Australia.

In other words, it’s taking the original route Facebook took with its Libra stablecoin by creating a permissioned network governed by the multi-stakeholder Libra Association.

Qoin is intended as both a form of exchange and a speculative store of value, traded on the Block Trade Exchange, which is a sister company of Qoin owned by the same parent.

Qoin bought out the struggling Bartercard business and client database and reverse-engineered a purpose and brand to the fledgling cryptocurrency, falsely advertising that it has been “Helping SMEs for 30 years.”

For a while Bartercard was most popular among builders and tradesmen who used it for ‘cash jobs’ but it lost traction when governments started taxing transactions.

Far from tokenising “spare capacity in the form of the Qoin digital currency” it’s a transfer of assets (cash) off the books of the SME for a liability controlled by a private company. Qoin works in complete reverse to Bartercard’s premise of a local stable currency: according to its agents it’s algorithmically designed to inflate in price to entice people to both buy and sell it.

I was told by a Qoin representative that “its price goes up whenever new merchants sign up to the system”.

The whole operation was even shut down in their country of origin, Australia, when the price plummeted on its exchange and it had to shut the exchange down, appearing like a hollow pyramid in the midst of collapse. The blockchain industry body in Australia revoked its membership and there is no longer a functioning exchange for investors to cash out.

I was told by customer service that a global exchange is “coming soon” but in the meantime, people can trade it back and forth between each other for goods on Qoin Facebook Buy’n’Sell groups!

Despite being kicked out of Australia and as a Ponzi Scheme it hopped the ditch to New Zealand where it has been allowed to operate and, according to its website, is a member of Blockchain NZ, despite the concerns of its Aussie counterpart.

“Independent accredited Qoin agents” (yes, that’s the title on their business card) travel around the country promoting and educating about the latest hot digital currency. According to its LinkedIn page there are hundreds of influencers and agents across NZ and Australia. 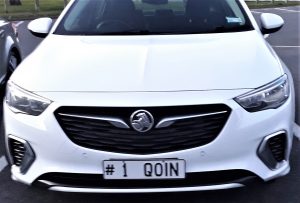 These travelling salesmen gatecrashed my town’s local enterprise AGM, putting up posters around town that misled an affiliation with our chamber of commerce. These “independent agents” earn a commission in Qoin whenever someone signs up and new recruits can also earn ongoing referral commission and become ‘super-referers’.

The agent told me that notable public figures in NZ are super-referers and that someone sold a Hawke’s Bay vineyard for $5m in Qoin and another was selling a property in Mexico for Qoin.

So like I’ve explained in a previous article, Qoin operates a form of network/pyramid marketing for money and they are targeting small retailers in hard-hit tourist towns.

How the Qoin Pyramid works

There is a circular relationship between the ‘asset/currency’, the exchange that sells it and the parent company that owns both entities. This is the most concerning Ponzi aspect of it all and the apparent reason behind it was kicked out of Australia.

When I asked the agents about the company being effectively kicked out of home country they both chimed with forced levity “that was just growing pains — we were growing too fast!”

BTX is the first exchange for Qoin, the progressive Digital Currency. Qoin is offered by BPS Financial Limited (BPS). BPS and BTX are related body corporates because the same company (Blockchain Investment Group Pty Ltd) is the sole shareholder for both BTX and BPS.

Qoin has joined the point-of-sale gold rush riding on the bandwagon of the Buy Now Pay Later crowd. And the wagons are backing since Square bought Australia’s Afterpay for $40 billion.

Whichever magic TAM formula Square used to justify the $40b price tag, it has set the fintech scene ablaze.

Many companies from the staid and traditional areas of finance are now rebranding as a ‘Fintech’ in much the same way opportunistic companies pivoted to blockchain, cryptocurrency, and marijuana in 2017 to attract investor capital or  pump the share price — like the infamous Long Island Iced Tea Co.

NZ non-bank lender Moola has specialised in short-term loans for over 7 years has done just that under a newly-created parent company, NZ Fintech.

Despite settling two irresponsible lending charges with the New Zealand Commerce Commission this year (one involving 50 customers) NZ Fintech is charging ahead to raise $30m from wholesale investors to launch a car finance app and eyeing up a NZ stock market listing. This charts a similar path to the success of Afterpay on the Australian ASX.NZ Fintech is promising eye-catching returns to investors of up to 14% pa. Several orders of magnitude greater than an NZ government 10-year bond yield of 2.9%.